Guess who eats at the Carnegie Deli? Guess who eats at the Carnegie Deli?

Of all the Jewish denominations, I’ve been the most attracted to Conservative Judaism. I won’t lie. This was initially because I am a political conservative. Intellectually I know there’s no correlation, but to me the word relates a philosophy; one that remembers and cherishes our past, but will honor our principles instead of being slaves to our tradition. It’s not as unbending as Fundamentalism but assumes that there’s probably a good reason why we have some of these traditions, and that even if we can’t put our finger on it, we’re probably getting something out of it that we may lose forever if we blindly plow into change.

It can, therefore, be totally understood that if I made this positive correlation, that others will make a negative correlation. This is just one of the problems facing the leaders of the Conservative movement as they explore ways to “rebrand” Conservative Judaism.

The movement’s problems, many agree, begin with its name, which has nothing to do with political conservatism and doesn’t accurately describe a denomination that accepts openly gay and lesbian rabbis and believes the Bible is open to interpretation. But that’s just for starters.

Deep dissatisfaction with the organizations that lead Conservative Judaism prompted a number of influential rabbis in 2009 to demand urgent change, warning, “Time is not on our side.”

And if you do the math, it isn’t. Citing a decline in affiliation of 14% over the last decade, it doesn’t take too much subtraction before the numbers hit, if not quite zero, than at least inconsequential.

“We are in deep trouble,” Rabbi Edward Feinstein of congregation Valley Beth Shalom in Encino told the convention the next day. “There isn’t a single demographic that is encouraging for the future of Conservative Judaism. Not one.”

I’ve got a real love for branding. It’s not just about logos, and color schemes, and stationary. Good branding is about 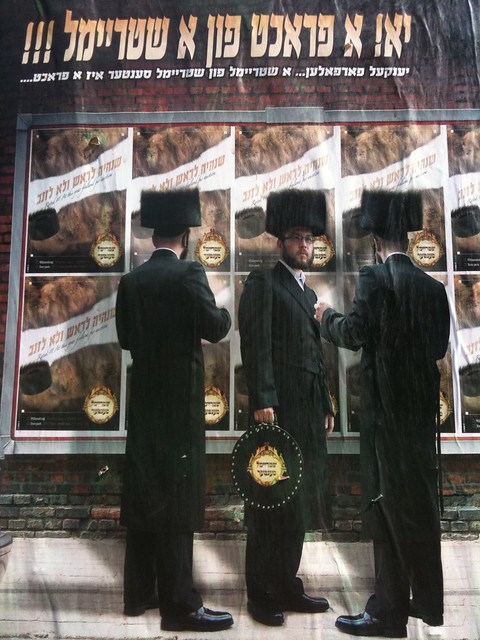 These guys know the value of branding

people, at a glance, figuring out who you are at the core. It’s not about your mission statement, or your bullet points. It’s your identity. Your attitude. And it says more about you than any About Me page could do.

Conservative Judaism is having an identity crisis. Or at least an attitude crisis. The article offers a few suggestions from Conservative rabbis, and because I’m totally an expert in branding or something, I thought I’d give my opinion.

Masorti Judaism – Change the name from Conservative to Masorti, Hebrew for “tradition” and used throughout Europe and Israel.

I don’t know how well this flies in Europe and Israel, but to me it sort of sounds like a cryptic sectarian name, and while I’m no stranger to the appeal of mystery, I can’t think of a worse name to call a group that you want to be appealing to the masses, unless it’s “Star Belly Jews” or something. If people don’t understand the basic idea, they get confused and leave without taking a brochure.

Temple Dues – Either drop synagogue dues, or switch to an a la carte system for temple services.

This is something I actually know about, because I’m in another organization (the Freemasons) that’s been freaking out about falling membership for the last few decades.  And, like the Masons, there’s a large group of Conservative Jews who want to drop the barriers to participation by making everything cheap to free. I think there’s certainly an argument for this, especially in the question of whether religions should be charging for religion (See: Scientology), but I’ve learned two things about this course. One, people don’t value things that are easy to obtain. And two, organizations need to have the money they need to survive. Nothing will stem the tide of Jews washing up on the shores of secularism better than money.

Bumper Stickers – “A Judaism of Relationships…”

I… I don’t even know what this means. Pass.

Magen Tzedek – Minnesota’s own Rabbi Morris Allen’s dream of making “kosher” really mean something, by ensuring that all kosher food suppliers treat their animals ethically in life, not just in death, and offering magen tzedek, the “seal of justice.”

I’ve said before that I’m no great fan of mixing religion with political causes, but in that I think most good people can agree that animals should be treated humanely, and that many rabbinical scholars would agree that a chief purpose of kashrut laws is to avoid unnecessary suffering, so I think magen tzedek is a no-brainer. As one of the most repeated complaints about religion by the non-religious is the sometimes stunning hypocrisy of some of the religious, arguing for higher standards in anything is a pretty good thing to do.  But it doesn’t really do much to answer the central question. What is Conservative Judaism at its core?

If you think I’m egotistical enough to answer that question, I’m going to surprise you just this one time. Really, I haven’t got a clue. Religion changes. It evolves. It struggles against itself. It wrestles with God.

I do know something about worthwhile, traditional institutions though, and I do have some advice.

First, do the ritual well. Find your light, hit your cues, and say the words correctly. When I see something taken seriously, I take it seriously.

Second, educate. A synagogue is, above all, a school. Discuss, teach, ask questions, and teach others to ask questions. Nothing is more addictive than genuine learning.

Third, be brothers and sisters. Community isn’t just a word on a monthly newsletter. Mean it. Treat people how you would like to be treated, and more.

Last is relevance. The traditions don’t have to change. Prices don’t have to be lowered. Standards don’t have to be gutted. Recognize, though, that generations change with the times, but this institution, and these worthy instructions, are still relevant people’s lives. Connecting people to those ideas by discovering why they should care is the best shot you’ve got.