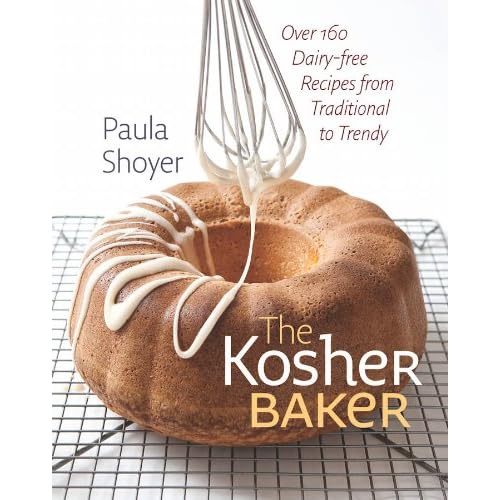 One of the many perks of my role here at TC Jewfolk include getting free galley copies of forthcoming Jewish cookbooks. (How awesome, I know!) While we don’t keep kosher, my mom is lactose-intolerant, and being the good Jewish daughter I am, I jumped at the opportunity to review “The Kosher Baker” by Paula Shoyer (Brandeis: 8/17/2010 release: $23.10), a cookbook of only pareve (dairy-free) desserts, so I could share them with her.
However, although the variety of recipes included in the book — from chocolate to fruit, cakes to pies, cookies to bread, easy to advanced, and more — is laudable, it’s basically just not doing it for me.
It started with the title. Of course I don’t use shrimp in my cookies — call it “The Pareve Baker” or even — for maximum reach — “The Dairy-Free Baker.” Heck, if you want to keep your J-cred, call it “The Jewish Dairy-Free Baker.” But I digress.
More substantively, the first thing I noticed was that much of the book simply takes a recipe that originally included dairy and swaps for the equivalent of a dairy-free option — pareve margarine for butter, dairy-free cream cheese for regular cream cheese, pareve puff pastry for… — you get the picture. Even the most timid bakers I know could have figured that out on their own, and wouldn’t need a whole cookbook to do so.
Which brings me to my next point: some of the ingredients are hard to find, at least here in Minnesota. The growing vegan movement and expansion of stores like Whole Foods and our local co-ops has done wonders for improving our access to some of those items called for in the book, but even as a foodie who enjoys hunting for interesting and unique ingredients, I still struggled to find them.
For example, I only know of two pareve margarine brands (one of them is Willow Run) available in the Twin Cities now that Fleischman’s Unsalted is no longer distributed here (Note: Someone please let me know when this changes!), and I’ve only found them at the co-ops. I also don’t regularly notice pareve frozen pie crust being available, well, anywhere. The lack of availability is very discouraging. And not every cookbook needs to have an elaborate story for every recipe, but if you’re going to include them, I like them to be broadly accessible. The non-recipe copy is uninspired and feels like you’re overhearing a self-important person at a party talk to a circle you’re not part of, between “my friend so-and-so this,” and “my son liked that,” and “ohhhh, my daughter does it this way,” it gets old. And, I’d at least like a little more information on what the recipe tastes like or how it could/should look when it’s done.
But, there are, of course, some saving graces. The cookbook really isn’t all bad, despite my more or less berating it so far. The shortbread cookies were more like sugar cookies than shortbread, but that’s not the worst thing ever (they didn’t come together very well, but the final product was fine). I tested the chocolate-creme cookies (think homemade Oreos) recipe sans creme filling, and they were a big hit, barely lasting a day because everyone liked them so much (I filled them with peanut butter and honestly, they were divine, and I’ll absolutely be making them again).
But the pièce de résistance was the iced lemon pound cake. It was easy to make, I typically keep all the ingredients on hand (except for the pareve margarine — but I think I might be able to swap that directly for vegetable oil… or butter when dairy-free isn’t required), and it tastes as good or better on days two and three, which makes it a winner in my book. I was particularly impressed by the glaze, which I normally would have made with a little milk and powdered sugar, but hers (obviously) doesn’t use milk, instead relying on lemon juice, giving it a deliciously gooey, thick, explosion of lemony flavor. I really could eat four or five slices in a given sitting, even though I know better. Seriously, you definitely should make this if you decide to pick up a copy of the book. So, this book isn’t all bad, but I’m not going to start shouting from the rooftops about it, particularly for only a couple of really good items. It has some other fun recipes like challah beer bread pudding with caramel sauce (a feat, if you ask me, to make caramel without milk) and Twinkie cupcakes, even if I was disappointed that it took me at least four readings to figure out whether there was a pareve pie crust recipe (there is). I give it a B-, but that’s still passing.

PREVIOUS U.S. Anti-Semitism Is On the Rise: Are You Surprised?
NEXT Is Elena Kagan The Next Aharon Barak? And Does Anyone Care?