No one tells you that sitting shiva is so food-heavy. But then again, we're Jewish, so how could it not be? There’s a quiet blue glow coming from my fireplace where we keep the candle burning at night and while we’re out. It’s past midnight and my house is silent except for the white noise from the furnace, but that will silence soon too, I’m sure. I’m unable to sleep, between the unusually loud thumping of my heartbeat tonight and the nap I took in preparation for what I expected would be a difficult evening. I’m sure the heavy dose of sugar at the end-of-service oneg didn’t help either.
I pry open the double doors to my fridge and stare down shelf upon shelf of food that has been brought over in the last week. No one tells you that sitting shiva is so food-heavy. But then again, we’re Jewish, so how could it not be?
The seudat havraah, or “meal of condolence,” is prescribed by the Talmud. Neighbors are required to prepare the mourners’ meal after they return from the cemetery, lest they forget to eat out of grief. Traditionally, round food symbolizing the circle of life is prepared, from green lentils (because they hold their round shape), to hard-boiled eggs, to round bread or bagels. I’ll admit I actually received none of these particular items, but I’m not complaining — just informing.
I don’t know what the offerings mean to the kind soul who made it, or what (if anything) they are trying to convey. For me, each container represents someone’s outward expression of words they don’t have, can’t say, or aren’t sure what to do with. Sometimes it’s emotionally difficult open yet another Gladware container — to realize that, if left to your own devices, it would have been cold cereal and fast food three times a day for the last 8 days if not for the generosity of those bringing you food. But it’s also unbelievably, soul-burstingly uplifting to know that all of these people — some I’m very close with, and others I’ve never met — are reaching out to me, telling me that this too shall pass, but in the meantime, here — for God’s sakes — eat something! 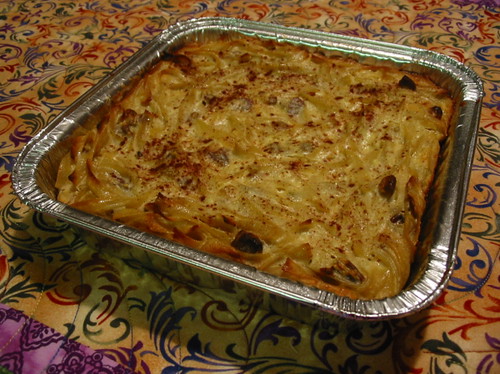 Some things have been store-bought, and some things (most, actually) homemade. We’ve had soup, pasta, salad, salad, and more salad.  There are breads, cakes, and cookies. Oh god, the cookies (including some unbelievably amazing shortbread ones that I swear to you I will get the recipe for and share). And, of course, kugel. I imagine some people lose weight after losing someone so close to them; I also assume those people aren’t Jewish, based on the steady stream of rich, delicious goodies arriving wherever I am.
People brought food as soon as they heard my dad died, via my temple’s Caring Community program. More food arrived with my brother and his brood, straight from their farm. Another batch turned up at the funeral, immediately followed by deliveries from family members. And then, as if to give one final push to the finish line, most of the minyan who came to the shiva service this evening arrived laden with buttery, baked goodness (although I spied some vegetables floating around). As the cantor said, it wouldn’t be a Jewish lifecycle event without the requisite banquet.
I don’t have a recipe for you this week — at least not in the traditional sense. But know that if someone in your community loses someone close to them, food is always appropriate. Some tips: