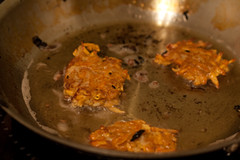 To commemorate such a miracle, we celebrate by eating foods made with oil. And that means all kinds of frying, includinglatkes, or fried pancakes (usually made of potatoes, but pretty much anything you can make into a loose batter and cook into a cohesive mass), which are one of the quintessential Hanukkah treats.

Latkes can be a meal on their own, serve as a side dish, or even just an appetizer. In fact, if you make them with ingredients like apples, cinnamon, sugar, and/or cottage cheese, you’ve got yourself dessert (do not underestimate our neighbors to the north!). Which brings me to my next point: while there may be something to be said for box mixes given the right occasion, latkes are so easy to make from scratch, do yourself a favor and skip the box and head for the real deal.

Just like these perfect little packages of Hanukkah goodness can be any part of your meal, they can be made with any number of different ingredients, often reflecting the locale. For example, Sephardic Mediterranean chickpea latkes use chickpeas like the Ashkenazi version uses potatoes. The common thread: fry those suckers in oil and dig in. 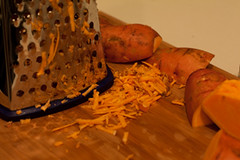 This year I’m opting for something slightly healthier  (although I have no illusions about what fried food does to my arteries) and swapping sweet potatoes for the usual Russets. It’s also a way to change things up without totally abandoning tradition. The upshot? This was the first time I’ve gotten my husband to eat that jewel of a root vegetable and actually like it. (He’s always a good barometer for this kind of thing.) I think that’s saying a lot. Plus, they look so beautifully orange on a serving platter! And let this be the year you quit arguing with yourself over the applesauce vs. sour cream debate and serve these with BOTH.

For multiplying the recipe, a ratio of 3:2:1 of eggs : sweet potatoes : small onion seemed to do the trick.

*You may need to drain the grated potatoes and onions; to do so, place them in a mesh strainer over a bowl and press down evenly to remove excess moisture.

PREVIOUS PopRocks: Dishing on "New York, I Love You" and Natalie Portman's Head
NEXT Minnesota Mamaleh: We’re Going WHERE for the Holidays?!