In this 2012 photo, Jared Daniel Levy (far right, in tan) was one of the local Scouts who used to plant flags for Memorial Day on the graves of veterans at Adath Chesed Shel Emes Cemetery. Sheree Curry and her oldest son Jared Daniel Levy in 2017.

This Memorial Day weekend I remember my oldest son, Jared Daniel Levy. He died in 2019 at the age of 18. While this holiday is traditionally a day to commemorate those who passed away during active military service, my son was not in the military.

Jared was a Cub Scout and Boy Scout with the Sabes JCC Troop 738 in the Twin Cities. Every year for Memorial Day, the scouts would gather to plant American flags at the graves of soldiers and Holocaust survivors buried at Adath Chesed Shel Emes Cemetery and the adjacent Beth El Memorial Park in the Crystal-New Hope area.

Jared, along with his brother and his buddies, took this solemn occasion seriously. He knew that some of the deceased no longer had family in the area to tend to or visit their graves. The planting of these flags was a special reminder that no Jew would be forgotten. We will remember.

On those Mondays — and an occasional Sunday — that we participated as a family planting flags by headstones, I had no idea that in a few very short years I would be burying my son on these same grounds, alongside these strong, brave soldiers who served our country (and Israel and other countries) so well.

Jared was no soldier, but he was a fighter. He fought for causes he believed in, often by contributing through acts of lovingkindness. Jared participated in walkouts to combat racism. He filled food boxes at Feed My Starving Children and Second Harvest to help ease the hunger of others. He stuffed backpacks with pens, notebooks, and other school supplies with the Twin Cities Black Journalists association to help bridge equity gaps for those who were less privileged. He spoke out against the ill effects of climate change and stood up for many of the small ways we could all contribute to a more environmentally friendly society.

Because Jared cared about the environment, it gave me great solace that although I had to bury a son far too soon, he is the first person to be laid to rest in the cemetery’s green space — the first green burial space at a Jewish cemetery in the Twin Cities. This was also meaningful because Jared, my first-born son, my first-born child, was born on the first of January in 2001. Jared Levy’s little brother in 2012 planting a flag at a headstone at Adath Chesed Shel Emes, the cemetery where Jared was buried in 2019.

The green space was dedicated on June 23, 2019. Jared was buried there almost a month to the day later, on Monday, July 22, 2019. Dozens of friends, family and community members took turns shoveling earth into his final resting space. I can’t say for certain, but it is also quite possible that he may be the first African-American Jew buried in this cemetery.

This cemetery holds a special meaning for me for another reason that forever connects my family to this site. I wrote and designed a brochure for Adath Chesed Shel Emes Cemetery during my days serving as the first full-time marketing communications hire at Adath Jeshurun Congregation, which owns and operates the cemetery. On the brochure is a 2012 photo from when the Scouts planted flags for Memorial Day. It bears the image of Jared’s little brother, my youngest son, with a bundle of flags in his right hand as he used his left hand to insert the wooden rod of one flag into the ground with ease. My oldest son, my left-handed son, was cropped out of the scene as if it were foreshadowing the day that his little brother would visit the engraved marker bearing the name of our beloved Jared.

There are no individual headstones for those who get buried in the green space at Adath Chesed Shel Emes Cemetery. But there is a stone monument that will house all the names of our departed loved ones who will one day be buried there. Jared’s name is the first to be etched on the first full line of the first granite slab that stands tall, greeting visitors as they gaze out over this parcel of naturally growing vegetation. 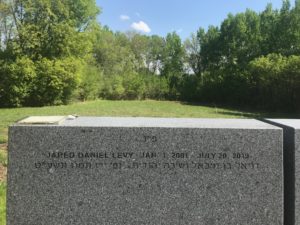 Jared Daniel Levy, at age 18, was the first person to be buried in the green space at Adath Chesed Shel Emes Cemetery.

Jared’s friends continue to visit him. I often receive text messages, sometimes with photos attached, as they tell me how they loved him, remember him, and honor him by placing at the monument CDs of his favorite music, letters, books, little pieces to the board games he played with them and other treasures, from their tears to their songs. This is their way of grieving and showcasing how the memories they hold of my son will forever be a blessing.

These friends were among the hundreds who attended Jared’s funeral service at Adath, the building in which he first set foot at age 2. His memorial service was moved last minute from the chapel to the sanctuary because the building was overflowing with love that day.  Who knew such a young man, at age 18, would have made such a lasting, positive impact on so many people in our adopted hometown. He clearly touched the hearts and souls of many.

The Hebrew meaning of the name Chesed Shel Emes is an act of loving-kindness — an act that has been performed by everyone who visits him. I am grateful to everyone who loved Jared in life and death and who continues to remember him and share their memories with me. I am grateful for Adath Jeshurun Congregation, its clergy, Rabbi Harold Kravitz, Rabbi Aaron Weininger, Hazzan Joanna Dulkin and the board and staff of Adath Chesed Shel Emes Cemetery, who also performed deeds of lovingkindness in more ways than can be named. I know Jared would be grateful and humbled to know of all the ways we received community support in our time of need. I am grateful. I am humbled.

My son was brilliant and loving with a kind heart. Perhaps only in a way that a mom could brag and dote on her child for eternity, it is my hope that as visitors continue to enter Adath Chesed Shel Emes Cemetery, whether it is on Memorial Day or any other day of the year of any year into the future, please stop by and visit my son. Remember Jared Daniel Levy.

Sheree R. Curry, a longtime Jewfolk board member, is a freelance journalist living in suburban Minneapolis. She has written previously about the Sabes JCC Scouts. She also wrote a Mother’s Day tribute about her son for USA Today. Follow her on Twitter @ShereeCurry.